Definite signs of life in 3 of the 4 Miss Kim lilacs.
The rabbit appeared this morning, first time I’ve seen it this year.
Pansies starting to show up at supermarkets and nurseries.
Not sure about the small lavender plants, although the big ones look good.
All the roses are starting to leaf.
3 of the 4 azaleas aren’t looking too good.

It was bad enough yesterday going to Cambridge and back, but the weather is even worse today: driving rain and wind, and there are puddles everywhere.
At such times, it’s well to remember that gorgeousness like this is not that far away.

I fed the front garden. It being just too nasty to hook up a hose, I used dry Miracle-Gro and filled the new 2-gallon watering can from the rain barrel, which is not in place but collected enough water nonetheless.
Took the lid off the compost bin so it’ll get a good soaking.
Still no signs of life in the grasses. Hope I didn’t plant annuals!
Moss growing in the cold frame. Bad?

The seedlings in the cold frame survived two nights of below-freezing temps.
I crazy-glued the gazing ball to its pedestal today, will have to cover it in the winter.
Was very pleased to see that my tiny fir tree seems to be doing very well up in the corner of the back yard. It was originally planted in a clay pot and transplanted last year when the pot broke. I forget where it came from.
Missed the Home Show (again) this year. Was in Hyannis today, too, but I hadn’t written it down.
Fluffles scared Scully today.

Glad to see the rain today, really wanted to rest, it’s been a busy week, and a busy day planned for tomorrow.
Got to a task left over from last year: deep-pruned the small holly, which once again has black mold on the leaves. I’m hoping that the pruning technique Candy and I used on the front inkberries, which are healthy and beautiful this year, will work as well on the holly. Pruning from the inside-out is hard work and murder on the arms, but the results are impressive.
Meet with Kelly and Ed Reed yesterday to get their bid on siding at Edgewater and replacement of the front door and front stairs. Kelly is a natural teacher, she’d be great for IFG!
Did some weeding yesterday at Edgewater, dug up grass clumps that I’ve been wanting to clean up for quite some time.

Yesterday, every person I encountered was nice to me, the first time in memory this has happened.
From an 8:45 am meeting with my Mentor TechWorks Mashpee High School freshman to a late dinner at Cosi in Wareham Crossing, everyone was cheerful and kind.
Maybe it was the weather: sunny and fairly mild. Whatever the reason, it was an exceptional day, made even more so by the recent rancorous online exchanges over the so-called health care reform bill.

Emme and I cleaned up winter debris in the front yard at Edgewater yesterday. We almost filled the truck, and the yard looked really nice when we were done.
Saw worms in the compost bin today!!

Stanford University and the Anita Borg Institute, which funds research on the role of women at high-tech firms, released a report this week that shows a bias against hiring women where poor management and a “fly by the seat of your pants” work style prevails.
When you consider that work/life imbalance is frequently cited as the reason women aren’t welcome in many dev shops, this makes a lot of sense: because of mismanagement, projects get out of control, resulting in last-minute all-nighters that are difficult or impossible for people (men and women) who have family responsibilities.
This could also be the reason for the bias against older workers in IT shops and why unmarried IT professionals rarely advance to senior levels.
The Borg Institute also found that high-achieving women in tech consider themselves to be “assertive, collaborators, hard workers who work long hours, are unafraid to question, risk-takers and analytical in nature.”
These are attributes which tend to be valued in urban areas but not in exurban/rural areas, like Cape Cod. Thus, firms that need intellectual capital to survive have to locate in high-cost urban areas where risk-taking and assertiveness are consistent with the region’s cultural norms.
There seems to be consensus in the industry that mixed-gender teams produce software of higher quality.
Further, employers on Cape Cod have told me that they have trouble recruiting competent IT workers, and no doubt this is true of Southeastern Mass. and parts of Rhode Island as well. Whether for better or worse, this likely has less to do with salaries than with organizational values, priorities and management competence. It’s going to take a lot of effort to change these, but in the long run, for the health of our regional economy, that effort will be well worth it. 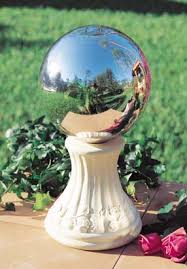 Put the gazing ball back on its pedestal. Fingers crossed that most of last year’s planting have survived.

Some see an old glass door; I see the top of a cold frame which now has radish and lettuce seedlings.
Bought some very inexpensive trellises and planted the four packs of Sweet Peas today.